The Avaya 9621G IP phone is one of the executive models in the large 9600 IP series lineup. It’s designed for serious phone users and offers users Gigabit connectivity and a colour touch screen. For more detailed information about the 9621G phone please read below. 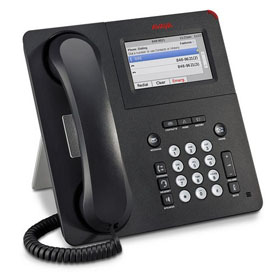 The Avaya 9621G IP handset is the step up from the 9611G IP phone . The “G” in both models denotes that they natively offer integrated Gigabit support. That said, there are really only very small differences on the 9621G – larger colour touch screen, POE class 2, custom name plate option, no extra USB connection and no soft keys as it is all done by touch. So unless you need POE class 2, do you really need a touch screen for an extra $200+ at RRP?

Incredibly, there are another 7 models above thex 9621G IP phone. The reality is the only other models you ‘d seriously look to might be the 9620C IP phone or the 9641G IP for reception. The /handset/avaya-9620c-phone-handset/ 9620C only offers the extra option of handset colour choice and actually a smaller screen and fewer functions – quite a premium for a only handset colour. The 9641 offers a bigger touch screen than the 9621 and integrated Bluetooth. Even for a reception point, the 9611 and 9621 really are the pick of the gigabit bunch. Even Avaya describes these two models as suitable for the essential or everyday user.

The models up from these three become somewhat tenuous for most. You start getting colour handsets, bigger screens and the choice of different colour handsets and custom faceplates. We suggest you look at the comparison chart at the bottom of the page to work out what ‘s best for your own requirements.

The 9621 phone is very easy to use with the large colour touch screen display, everything is easily found and the colour really does make it very user friendly. If you want to go for cheaper handset in your deployment then the 9611 , or the 9608 or 1600 IP phones for non gigabit environments (10/100MB) would be where you should look.

An intuitive colour touch display means you can navigate the 9621 handset functions easier than the monochrome handsets on some IP models. You also have the programming choice of 0-5 on screen sofkeys for context sensitive features. “Context sensitive” means that depending on which function you are performing (making a call, accessing voicemail etc) it will then display the most logical options for you on screen.

On the screen you can also toggle between different screens at a touch and the handset can display up to 24 staff/ phone lines or whatever else you want to program them for. In the event you like to see more than 24 users you can add an optional 12 button DSS console with LCD screen to provide 96 programmable buttons in total.

In a typical gigabit environment rollout the Avaya 9611G IP and 9621G phones are normally the most popular. The cheaper 9608 is a better choice for companies operating 10/100MB environments. Whichever IP handsets you choose you can also mix and match from any IP or phone handsets including the budget Avaya 1600 IP phones . If you ‘re looking for a virtually identical – but less expensive- non-IP version of this phone, check out the popular 9508 phone handset.

Like all IP handsets, the Avaya 9621 phone allows you to plug it into any Ethernet port that is connected to the Avaya IP500 telephone system will register automatically. This makes staff moves very easy because you simply BYO your IP handset and away you go. Your extension number and your all user preferences are also instantly reinstated. This also works for staff moving between office locations – they simply log on to an available IP phone.

To experience the Avaya 9621 IP handset firsthand, give our friendly staff a call today and arrange a no-obligation demonstration. We look forward to showing you how an Avaya IP phone system can transform your business.